Learning to Step Back

I believe most of the parents have experience of BUB falling down from adult beds. HIM’s first fall was when he was 5 months and a half. It was short after he learned to roll over. I left him on the bed for only two seconds after nappy change and he fell down from around one metre high (we had a very high bed in the master room). I did not see how he fell. I did not know if his head or his bottom hit the floor first. Everything happened too fast for me to react, and he was still a very tiny little person at that time. That was really scary experience. Luckily we had carpet in our bedroom and I offered breast milk immediately after his fall. He had just cried for 10 seconds or so, and became normal again. I checked his arms and legs, and observed his behaviour for a week before I fully believed he was alright.

HIM had one more fall short after his first one, from a surface around 50 cm high (our bed in the guest bedroom). Therefore, I was afraid of leaving him on adult beds unattended. I always put him on the floor whenever possible, even if I only had to leave for one second. This morning, after I brushed his teeth, while staying on our one-metre high adult bed, he suddenly became very excited and started throwing his books onto the floor. The first thing I thought of was to tell him that “books are for us to read, not for throwing”, but then I thought he might do this on purpose. I decided to let him do it and find out the reason. So he threw his books onto the floor, one by one, and he poked his head out to look at the book each time he threw one. He then threw the pillows, my clothes, my earplugs, etc. He poked his head out to observe for several seconds each time after he threw an item onto the floor. I picked up some of the stuff for him, put them back on the bed, and he threw them onto the floor again. We kept doing this for around 20 minutes. I have realized that he became more and more cautious when he approached the edge of the bed. I believed during the item throwing and observing activities, he learned that it was dangerous if he got too close to the edge of the bed.

In the afternoon, we were sitting on the 50 cm bed together, and he started throwing things onto the floor again. Five minutes after these throwing and observing activities, he started to climb off the bed by himself. I placed a blanket on the floor and let him continue with his adventure. Although not always successful, he was able to get off the bed safely and nicely at times.

As adults, most of the time, we cannot understand our BUBs’ behaviours. They do things not a normal adult would do, so intuitively, we try to stop them and teach them what they “should do”. However, if we step back, and let them explore the world the way they like, they may be able to learn a lot more than what we can teach them. HIM is almost 11 months now and the way he learns has become extremely important. At this age, he learns new skills almost everyday. I will keep reminding myself as long as he is safe, I should let him explore the world as freely as he can, hopefully he will become a kid enjoys learning from his own behaviours and will be able to get the most of it by himself ^_^ 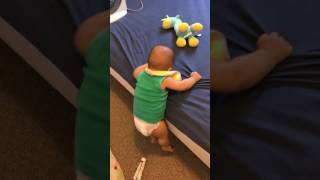 Learning to Step Back